On June 7th and 8th, at the JVE in Maastricht, the Netherlands, the third Form & Formalism conference will be taking place, under the title Formalisation & Dialectics. Pasted below are the manifesto, schedule and poster for the conference (designed by Mary Ikoniadou).


It has been two hundred years since the glacial drift of syllogistics gave way to the unsteady movements of science, a double revolution that would both revive and divided the discipline of logic. Two texts served to mark the irreversible thresholds that logic had crossed: Hegel’s Science of Logic in 1812, and Boole’s Mathematical Analysis of Logic in 1847.


Were it not for Hegel’s own excessive resistance to the idea of mathematising logic – an idea not yet realised before his death – the most doctrinaire dialectician would no doubt expect the eventual synthesis of these anti- thetical trajectories in a ‘higher unity’. On this score, however, history has been meek. The two traditions issuing from the logical revolts of the nineteenth century – the tradition of mathematical logic, on the one hand, and dialectical logic on the other. By the twentieth century, the gulf between The Algebra Of Revolution announced by Herzen and Lenin, and The Revolution In Algebra begun by Grassmann and Boole had become almost entirely void of communication. Dialectical philosophers, with a handful of brilliant exceptions, would become increasingly oblivious to the events unfolding in the mathematical science of logic, while mathematical logicians, again with rare and ingenious exceptions, would become increasingly unconcerned with the demands of dialectical philosophy.


It is this situation that we wish to interrupt.


If dialectics is to be reanimated, today, we must cross it at is point of greatest resistance, a blind spot formed by a resistance to mathematics: the idea, which Hegel resisted furiously despite the embryonic status in which his time retained it, of logical calculation.


It was through this idea that history would give birth to another that is ultimately more profound: the idea of logico-mathematical formalisation, an idea that would liberate mathematical thought from the contingency of its objects, through an act of reflection that would make it itself a mathematical object. This would, moreover, be a reflection subject to an essentially dialectical drama, slipping away from its own grasp, a refractory reflection that would generate antinomies, incompletions and subversions of meaning. Through this struggle to apprehend itself as such, mathematical logic would, quietly, and without attracting the attention of either of the two traditions that the nineteenth century began, rebuild the dialectic from the calculi Hegel rejected.

The purpose of this conference is, first and foremost, to draw philosophy’s attention to this reanimation of the dialectic from the ‘dead bones’ of calculation, to accelerate this reanimation through careful experiments
in formalisation, and interrupt the servitude to ‘the understanding’ to which philosophers have, for the last century, indentured mathematical logic. If philosophy wishes to find in logic something other than a regimentation of the understanding’s prejudices, then the task of tapping the underground current of the dialectic in mathematical logic the logico-mathematical force latent in dialectical philosophy, is one we can no longer ignore. 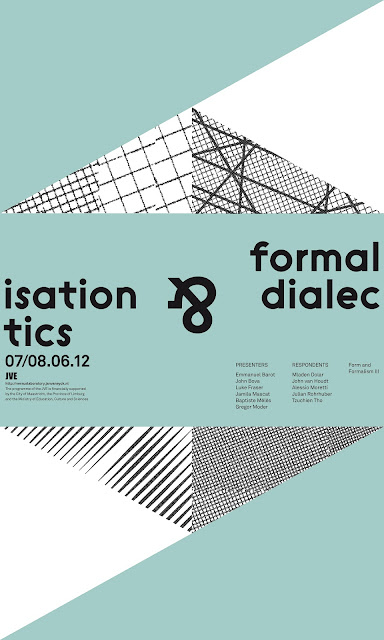 
Can be downloaded HERE.

Would anyone out there with a bit of background in logic (or who's otherwise just tenacious) be interested in putting together a slow-moving reading group on Girard's "Locus Solum" monograph? Wonderful, brilliant and terribly dense material. Really ideal for this sort of thing.

If you're not already hooked by the epigraph, I don't know what to tell you:

"Go back to An-fang, the Peace Square at An-Fang, the Beginning Place at An-Fang, where all things start (...) An-Fang was near a city, the only living city with a pre-atomic name (...) The headquarters of the People Programmer was at An-Fang, and there the mistake happened: A ruby trembled. Two tourmaline nets failed to rectify the laser beam. A diamond noted the error. Both the error and the correction went into the general computer."

What I want to say about the Good can be understood in relation to Wittgenstein’s remark, “The Good is outside the space of facts.” It turns out that there is no space of facts, that the facts do not make a space. But it turns out that way at a particular point of real spacetime – where the Good diagonalizes out. In this way, the sacrificed totality of facts, and its floating subject, are both transfixed and opened. They are converted into relation with what is above and beneath participatory facticality – existence and the One – as these enter their disjunctive alignment.

Fernando Zalamea's seminar for the Versus Laboratory project, "Sheaf Logic & Philosophical Synthesis", is now available as a podcast: 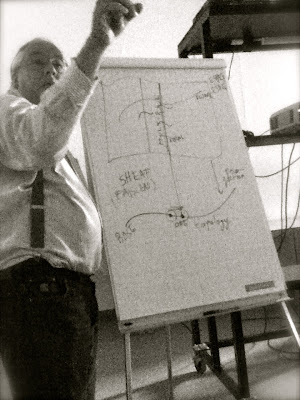 It was a fascinating event, and I'll have more to say about it soon. For now, you can wash your dishes and sheafify your abductions at the same time. What else could you possibly want?

Note: The sound quality of the recording has been somewhat improved, thanks to the technical prowess of Julian Rohrhuber. The links have been updated to send you to the improved version of the podcast.
Posted by nervemeter at 10:56 AM 1 comment:

Catarina Dutilh Novaes of M-Phi and NewAPPS fame has just released an early draft of her forthcoming book, Formal Languages in Logic: A Cognitive Perspective, which promises to be extremely interesting. You can find a copy of this draft via the link above.
Posted by nervemeter at 12:11 PM No comments:

Reminder for Zalamea Seminar at JVE

The point of this seminar is not only to acquaint us with the vibrant landscape of contemporary mathematics – and the field of sheaf logic and category theory, in particular – but to show us how this landscape’s powerful new concepts can be deployed in the fields of philosophy and cultural production. Its aim is nothing less than to ignite a new way of thinking about universality and synthesis in the absence of any absolute foundation or stable, pre-given totality – a problem that mathematics has spent the better part of the last fifty years thinking its way through, and which it has traversed by means remarkable series of conceptual inventions – a problem which has also animated philosophical modernity and its contemporary horizon. This marks something of a variation on the theme of antagonism and technique that Versus has taken as its focus for the coming year: rather than seek to fragment philosophical concepts through the prism of non-philosophical disciplines – understood as something like “conditions for philosophy” – we will mobilize mathematical concepts and techniques to synthesize and render continuous what philosophy has fragmented. The crisp dichtomies of realism versus idealism, form versus content, the static versus the dynamic, and so on, are skillfully woven into a complex oscillating fabric that, far from obscuring the polarities in a night in which all cows are black, unleashes a living swarm of powerful conceptual nuances and distinctions from what was, in retrospect, a lazy taxonomy. This labour of synthesis, itself, demonstrates how far real mathematics – the living mathematical practice of the present age – outstrips anything dreamt of in our philosophy.

Our guide in this endeavour will be Fernando Zalamea, a Columbian mathematician, philosopher and novelist whose work seeks to explore the life of contemporary mathematics while redeploying its concepts and forces beyond their native domain. In an incessant, pendular motion, he weaves the warp of post-Grothendieckian mathematics through a heterogeneous weft of materials drawn from architecture and fiction, sculpture and myth, poetry and music.

We see Zalamea’s work as expressing an all-too-rare effort to subject philosophy to the condition of mathematics, and his degree of immersion and care for the latter is perhaps unmatched by any since Albert Lautman. If Lautman was Deleuze’s Virgil through the rings of modern mathematics, we may count on Zalamea’s work to guide us through the contemporary mathematics that we believe any philosophy awake to its own times must traverse. Just as analytic philosophy emerged from the shockwaves of the explosion of classical logic and set theory onto the scene in the early 20th century, the conceptual force of mathematics after Grothendieck holds the potential to spawn a new, ‘synthetic’ vision of mathematically-conditioned philosophy for the present age, one which Zalamea foreshadows under the rubrics of transitory ontology, epistemological sheaves, and universal pragmaticism. Though the seminar will not be fail to be of interest to mathematicians and logicians, who we think will find even their own terrain illuminated by Zalamea’s insights and mediations, we hasten to point out that the seminar will presuppose no prior knowledge of advanced mathematics.

We ask that the seminar participants read the excerpt from Versus Laboratorian Luke Fraser’s translation of Zalamea’s Filosofía Sintética de las Matemáticas Contemporánes (Synthetic Philosophy of Contemporary Mathematics), which is forthcoming from Urbanomic Press and which we have provided for the seminar participants in draft form. Like all Versus Laboratory seminars, this will be a fully participatory event, with plenty of time for a detailed discussion of the concepts and problems at stake.

Readings for the seminar can be found HERE.
Posted by nervemeter at 11:38 AM No comments:

Not technically part of MIT's "OpenCourseWare", but all the readings are available as links & it seems that we may have audio to look forward to.
Posted by jb at 8:34 PM No comments: