Lawvere on Mathematics and Maoist Dialectic 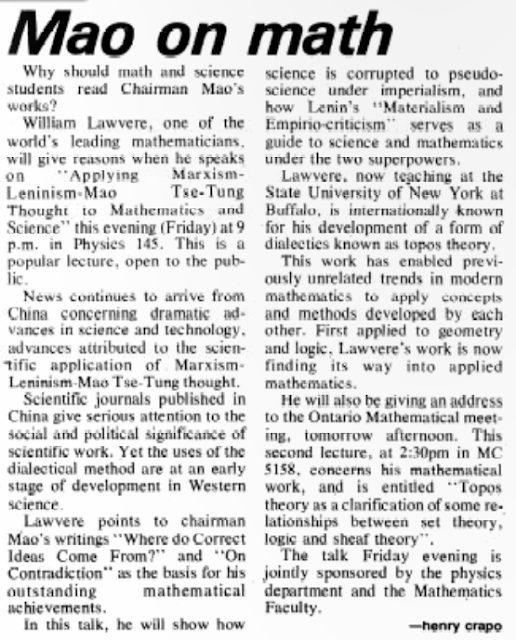 I haven't yet been able to locate any written trace of the lecture mentioned in this article ("Applying Marxism-Leninism-Mao Tse-Thung Thought to Mathematics & Science"). But, to see how mathematics might appear in the incandescence of the Maoist dialectic, you can read this short but incredibly dense text, "Quantifiers and Sheaves" -- which, it turns out, was first presented in my hometown of Halifax, NS, where Lawvere held a position in the Dalhousie Mathematics Department (before, according to rumour, the university made the reckless decision of firing the militant, effectively flushing Dalhousie -- at the time one of the world centres of category theory -- out of the annals of mathematical history. One bloody-nosed reactionary in an elevator, the rumour goes, and the subject-body is dispersed). Know that everything after page one likely demands some familiarity with category theory in order to follow:
Lawvere - Quantifiers and Sheaves

What interests me, personally, in this line of thought is the particular relation it crystallizes between the dialectic and logico-mathematical thought, something I am just beginning to study for the same of a long-term project (a phd dissertation, as a matter fact, and a research project at the Jan van Eyck Academie). As I try to survey a few of the more interesting -- and explicit -- intersections between mathematical logic and the dialectic over the next several months, I'll try and put together some brief posts on the material for this blog. This will have me looking closely at approaches to the dialectic departing from game semantics, paraconsistent logic, and -- perhaps most interestingly -- Uwe Petersen's patiently articulated substructural sequent calculus with unrestricted abstraction.
The ultimate objective will be to shed light on the tensions between the formal, the transcendental and the dialectical in Jean-Yves Girard's  research programme, which has for some time been an object of interest for me.
Some remarks on Lawvere's text, based on quick and superficial first impressions:
PAGE 1 (p. 329):
At the very beginning of the essay, Lawvere situates his problem not only within the theory of the dialectic, but in Mao's theory of contradiction. No sooner have we located a unity of opposites than we have singled out its "leading aspect."

“We first sum up the principal contradictions of the Grothendieck-Giraud-Verdier theory of topos in terms of four or five adjoint functors, significantly generalizing the theory to free it of reliance on an external notion of infinite limit.” (329)

What is at issue here is a sublation, and a passage of the theory from being-in-itself to being-for-itself. Hegel:

“We say that something is for itself inasmuch as it sublates otherness, sublates its connection and community with other, has rejected them by abstracting from them. The other is in it only as something sublated, as its moment; being-for-itself consists in having thus transcended limitation, its otherness; it consists in being, as this negation, the infinite turning back into itself.” (Science of Logic, 126-7) [A pdf of the new Science of Logic translation, by the way, can be found HERE.]

Notice Lawvere's synthesis of the very concepts of ideological combat and scientific rigour:

"When the main contradictions of a thing have been found, the scientific procedure is to summarize them in slogans which one then constantly uses as an ideological weapon for the further development and transformation of the thing.”

A historical-materialist conception of scientific practice as the "development and transformation of the thing" -- a position most clearly articulated by the Althusserian school, in Badiou's Concept of Model, for instance -- is pushed one step further, and, to the extent that it short-circuits the distinction between ideology and science,* in a distinctly non-Althusserian direction: this notion of slogans -- as a means for condensing and steering that process of transformation -- as being at once both scientific instruments and ideological weapons, as the war cries of science!

* Now, I'm not entirely certain that this is a true exception to the Althusserian conception of science, which, after all, explicitly denies that the demarcation between science and ideology (or 'spontaneous philosophy') is visible from the perspective of scientific practice in itself. Drawing the demarcation takes philosophical work, and it is no less an intervention into scientific practice than it is a description... All I want to do here is to underscore the (already obvious?) fact that Lawvere's concept of "slogan" is an intense condensation of a significant epistemological problem -- the question as to whether there is, or can be, an identity between ideological combat and scientific process (an "identity of opposites"?).


“Doing this for ‘set theory’ requires taking account of the experience that the main pairs of opposing tendencies in mathematics take the form of adjoint functors, and frees us of the mathematically irrelevant traces ([EPSILON]) left behind by the process of accumulating ([UNION]) the power set (P) at each stage of a metaphysical ‘construction’. Further, experience with sheaves, permutation representations, algebraic spaces, etc., shows that a ‘set theory’ for geometry should apply not only to abstract sets divorced from time, space, ring of definition, etc., but also to more general sets which do in fact develop along such parameters. For such sets, usually logic is ‘intuitionistic’ (in its formal properties), usually the axiom of choice is false, and usually a set is not determined by its points defined over 1 only.”  (329)

Here we have one of Lawvere's main philosophical theses: that the dialectical concept of contradiction is either captured by, or at least expresses itself in mathematics as, the concept of pairs of adjoint functors. This is something I still need to explore, but I'll try and prepare a post in the near future which examines this concept and the argument for its association with dialectical contradiction.

This "freeing from irrelevant traces" is, again, an effort of sublation, of passage to the theory-for-itself, by relieving the actual conceptual labour that set theory performs, within the general context of mathematics, from reliance on extrinsic contingencies -- contingencies associated with the (accidental?) placement of this conceptual force by the Zermelo-Fraenkel axiomatic, by the defiles of syntax, etc.

Thus liberated, the concept of set is free for generalization -- a generalization which straightaway marks a departure from what, initially, seemed like the most basic and essential features of what we called 'sets': their discreteness and extensionality.

The internal logic of these 'generalized sets' (toposes or topoi) is, for natural reasons, no longer classical but intuitionistic (another way to put this is that their logic is now organized by a Heyting algebra instead of a Boolean algebra, which, in turn, can be seen as a special case of Heyting algebra). This does not mean that intuitionistic logic -- which can be thought of as classical logic without the law of the excluded middle, or, better, as an asymmetrical version of classical logic in which half of the elegant dualities of the latter (the De Morgan rules, for example) are flattened like a loaf of bread at the bottom of a grocery bag -- is dialectical logic by Lawvere's lights. It is just a local feature of it. When Lawvere makes himself explicit on this point, it is topos theory, or sometimes category theory which gets the title of dialectical logic, or, more precisely, of the "objective dialectic" (which seems to leave open the question of the subjective dialectic...).

I have a fair bit to study before I can comment any further on this piece. In the meantime, I'll be reading Lawvere's kindly pedagogical book, Conceptual Mathematics to catch up on the math.

It would also be a good idea to revisit Mao's On Contradiction, which, it's worth observing, is the first entry in Lawvere's bibliography.